To Buy: For the Dinosaur Lover

Do you have a dinosaur lover to shop for? Whether you’re just training a toddler in the ways of the prehistoric beasts or have an elementary school child ready to read about dinosaurs all on their own, BetweenThesePages has a dinosaur suggestion for you. 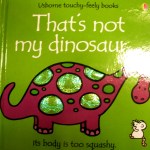 For the Board Book Crowd: That’s Not My Dinosaur by F. Watt
This is the perfect choice for a future paleontologist who is still going through that all important chewing and poking stage of their education.  Each page features a different (wrong) dinosaur.  This series is known for its relative durability (essential in something that is bound to be gummed and grabbed). There is a wide variety of textures for the little dino detectives to enjoy, set off by a wide range of adjectives. Of course at the end, there’s the payoff of finding the right dinosaur! Kids will love the touchy feeling fun and the predictable structure.  No content of concern.

For your 2-6 year old. Dinosaur vs. Bedtime by Bob Shea
I dare you to not have fun while shouting “Roar!” It won’t satisfy the scientific child who wants to identify different kinds of dinosaurs, but it will satisfy anyone in need of an awesome bedtime read. Dinosaur battles all sorts of difficult situations: a big slide! a bowl of spaghetti! He roars, he wins! But even an incredibly feisty red dinosaur is no match for bedtime. Bright colors, limited text and a go-to-sleep message? Big win in my book. No content of concern.

For your independent reader: Lulu and the Brontosaurus by Judith Viorst.

This book also wins points in my book because it reminds me of one of my all time favorite picture books What Do You Do With a Kangaroo? Lulu may be a right royal pain but she is not a wimp.  In her supremely bratty way she marches through the forest to her goal.  But everything changes for Lulu when she meets her brontosaurus.  He sees the world quite differently than she does, and after only a short time with him, she is a changed girl. Viorst kindly provides three endings should you not like any particular one, and continues her authorly asides throughout, something I found charming.

This book also completely screams to be read aloud, so even though your third grader (or advanced second grader) could read it independently, consider it a candidate for a bedtime chapter book.

Sex, Nudity, Dating – None.
Profanity – Lulu says “foo on you.”
Death, Violence and Gore – A snake threatens to squeeze Lulu dead.  She replies “not if I squeeze you deader.”  She does squeeze him but does not kill him.  A tiger threatens to eat Lulu as her afternoon snack, but Lulu bonks the tiger over the head.  A bear threatens to scratch Lulu to pieces with his claws, but she stomps on his toe.  Lulu ponders squeezing, bonking or stomping the dinosaur when she does not get her way.
Drugs, Alcohol and Smoking – None.
Frightening or Intense Things – None. 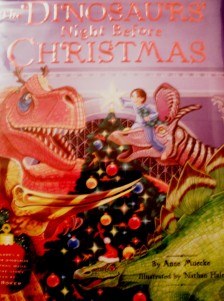 For a holiday theme: The Dinosaurs’ Night Before Christmas by Anne Muecke

This festive treat takes the familiar poem by Clement Moore and dinofies it.  A boy who lives across from a museum is startled as the dino fossils come to life.  He scurries across to investigate only to find a dinosaur Christmas party in full swing.  It names lots of dinosaurs which should please your little enthusiast, and if you’re lucky, your copy will come with a CD of Christmas carols altered to include dinosaurs.  (If that sounds like your idea of a headache, you can try to hide the disk, but be warned, lyrics are at the end of the book with tune suggestions, so you may be out of luck).

Great for: Lovers of Night at the Museum.  Anyone who’s dreamed of dinosaurs coming to life will get a kick out of this!

Sex, Nudity, Dating – None.
Profanity – None
Death, Violence and Gore – The boy worries that the dinosaurs might want to eat him.
Drugs, Alcohol and Smoking – The boy and dinosaurs drink eggnog.
Frightening or Intense Things – Dinosaur skeletons shouldn’t frighten any real scientists.

3 Responses to To Buy: For the Dinosaur Lover